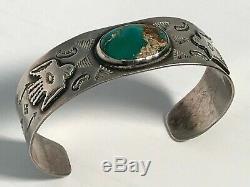 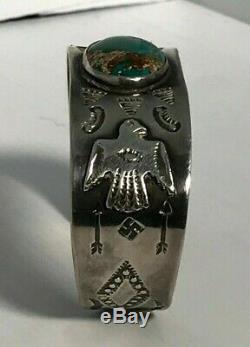 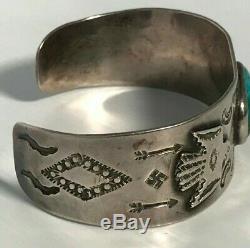 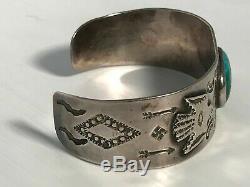 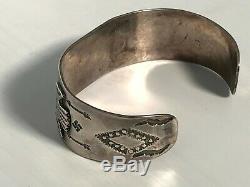 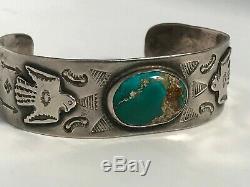 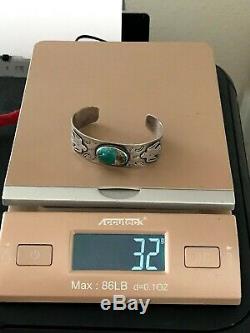 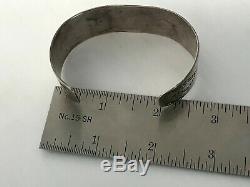 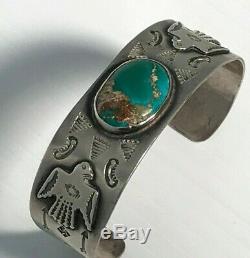 This Early 20th Century Navajo Dyer Blue Turquoise Men's Cuff Bracelet weighs 32 grams and is full of symbolism and historic significance. One of the most popular jewelry designs used for the curio trade was the swastika symbol, common to most indigenous peoples the world over and used throughout time. There is historical precedence of the use of the swastika like designs by North American native peoples, who usually viewed the symbol as a representation of the four directions: the Navajo use a design often referred to as'whirling logs' in sandpaintings, and the Hopi paint a four armed pinwheel design on rattles symbolizing the migrations of the clans across the continent. A great deal of interest was generated about the swastika symbol around the turn of the twentieth century. In North America, it became a very popular design element symbolizing good luck and was prevalent in period architecture, advertising, jewelry and on good luck tokens. In Navajo, the swastika represents the Whirling Log, vehicle of Culture Hero. The hero sets out on a long journey down the San Juan River, in which he hollows out a log to help him in his attempt.

During the journey, the hero encounters many misadventures but gains important celestial knowledge. When he reaches his destination, the gods take his log out of a whirlpool where the rivers meet and help him to shore. Because of its popularity, traders encouraged Indian artists to use it on their crafts made for the tourist trade from about 1890 to 1940. Starting in 1934, East Coast dealers of Indian good urged traders to discourage craftspeople from using the swastika as a design element on Indian arts and crafts because of its adoption by the German Nazi party. On February 28,1940 a proclamation was signed by the Hopi, Navajo, Apache and Tohono O'odham tribes renouncing and banning the use of the swastika on their artwork.

The Thunderbird, described as a supernatural being, the enormous bird was a symbol of power and strength that protected humans from evil spirits. It was called the Thunderbird because the flapping of its powerful wings sounded like thunder, and lightning would shoot out of its eyes. The Thunderbirds brought rain and storms, which could be good or bad. Good when the rain was needed or bad when the rain came with destructive strong winds, floods, and fires caused by lightning. The Dyer Blue mine is a small turquoise mine located near the town of Dyer, in Esmeralda County, Nevada.

The Dyer Blue mine is producing limited quantities of dark blue to greenish blue turquoise with stunning reddish brown spiderweb and patterned matrix. It is 2.5" circumference and would fit a 7" wrist. The item "Early 20th Century Navajo Dyer Blue Turquoise Men's Cuff Bracelet 32 grams" is in sale since Tuesday, June 23, 2020. This item is in the category "Jewelry & Watches\Vintage & Antique Jewelry\Vintage Ethnic/Regional/Tribal\Native American (pre-1935)".