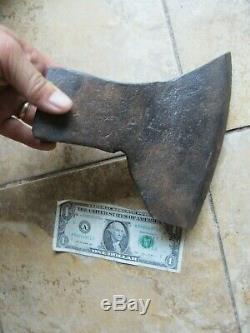 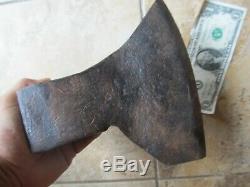 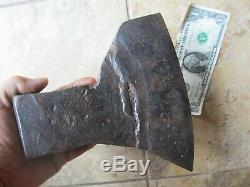 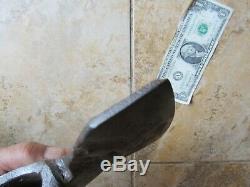 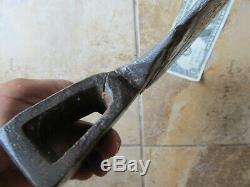 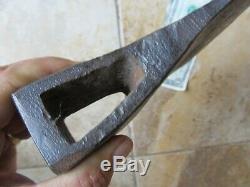 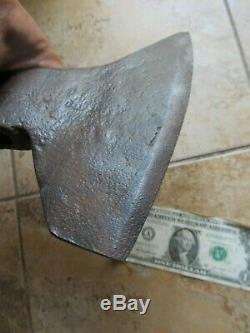 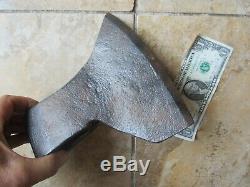 Very early colonial American antique IRON BROAD AX, hand made by early blacksmith. Great looking appearance and patina to the iron. As shown, it has great lines and early, particularly broad style. Measures about 7" long x 7" high x about 1 3/4 wide. Made by early blacksmiths to use to trim and cut the early 8" x 8" timbers used in construction.

These large ones were closely guarded, but they were also occasionally given, or traded, to early native American tribes and warriors. Used to generate good will, as they were very useful to them and something they had no other way to get. THIS ONE WAS VERY WELL-MADE AND HAS GREAT EARLY LINES. Probably made NO LATER THAN 1700. Look at the great, early, particularly widely flaring, cutting edge.

You can see how it was "folded" over and forged together by the early blacksmith. The lower edge of the blade has been squared off. Not sure if this was done when it was made, for a particular purpose, or if it broke during use and was "repaired" by squaring it off. Ou can picture the early blacksmith WORKING OVER THE ANVIL AND POUNDING THIS OUT SO MANY, MANY YEARS AGO!! Must have had a great history if it could only talk. GREAT DISPLAY ITEM WITH A VARIETY OF COLLECTIONS AND A GREAT DISPLAY ITEM. The item "Early Antique Colonial Broad Ax, BLACKSMITH, Native American, Revolutionary War" is in sale since Sunday, May 5, 2019. This item is in the category "Collectibles\Cultures & Ethnicities\Native American\ US\1600-1799\Other Nat.

The seller is "marvinsmom9" and is located in Hampden, Massachusetts. This item can be shipped worldwide.