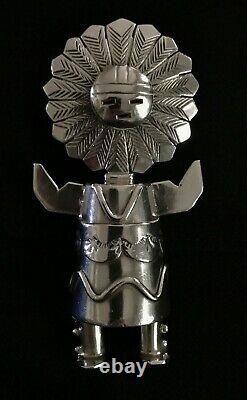 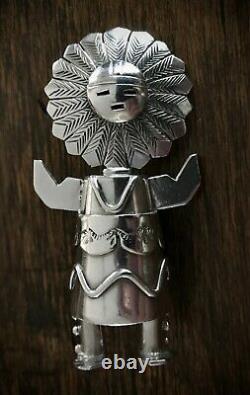 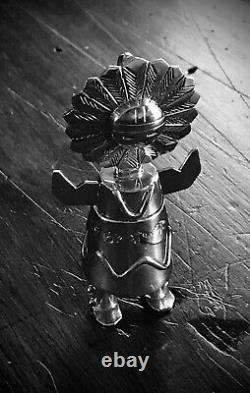 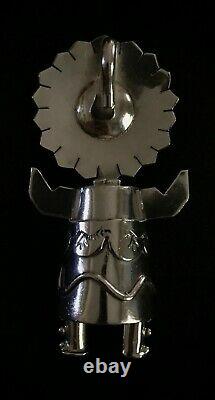 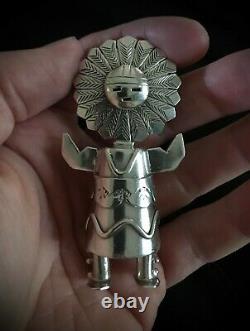 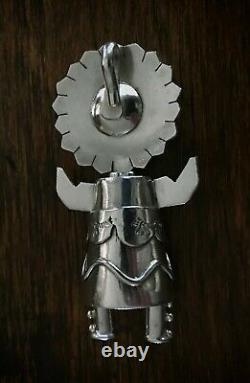 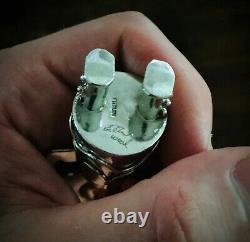 This is a stunning piece by famous Navajo silversmith Esther Wood. This is an example of one of Esther Wood's earliest works. Esther based this piece on her Navajo beliefs and upbringing.

Kachinas are supernatural beings central to spiritual beliefs held by the Pueblo Indians of the Southwest. During religious ceremonies, men amongst the tribe would impersonate these spirits, and girls received Kachina dolls that were to be used for prayer. This pendant depicts a "Fire Keeper" Kachina Doll, who appears in the creation story of the Navajo Indians. Esther Wood's work is featured in the Smithsonian American Art Museum. She is widely recognized for her beautiful manipulation of high grade sterling silver, and the incorporation of precious stones in some of her pieces.

The Kachina seen in the photos above has a 1995 creation date, making it around 25 years old. When I first came across this piece way back in the mid 90's, I was immediately taken by its design. While established at the time, Esther Wood had not yet gained the notoriety in the Native silversmith world that she most certainly has today. The Kachina was displayed in a glass case - alone. It was (to my amazement) standing up - in true "doll" fashion.

I've seen hundreds - if not thousands - of sterling Kachina pendants. Almost every one of those pendants is "flat backed, " 2-Dimensional in nature. What I had NOT seen, and still have not seen replicated in such a way to this day - is a Kachina that is more a little silver statue, than a pendant. This Kachina is barrel chested. It is wide and full, a wonderful Native American charm of sorts.

I remember walking around the display case and marveling at this perfect sterling doll standing upright inside. Even before I had the chance to hold the piece, I knew I had to have it.

Aside from its 3-Dimensional design, the detail that went into crafting this piece is simply unparalleled. Now I love this piece - I fully admit, but I do not believe my feelings towards the artistic work are biased. Starting at the Kachina's head, look at the large, circular disk that circles the Kachina's face in entirety. The disk is incredibly symmetrical, and finitely defined. The appearance of the disk is that of a Native American headdress. There are 18 feathers that make up the perfect headdress, each and every one individually defined. While the headdress is composed with attention to symmetry - each feather is slightly different from one another. They all bear clear cut, sharply defined etchings that truly give the silver a "feathered" aesthetic. Of course, at the very center of the handcrafted headdress is the Kachina's plump little face. The pace is simple, but elegantly so. It resembles a sphere cut in half, with the face protruding slightly from the silver feathered headdress background. I LOVE how Esther Wood uses only 3 deep indentations in the silver to create her Kachina's facial features. Two deep rectangular divots make up the Kachina's eyes, and a slightly larger rectangular divot in the silver below the eyes delineates the Kachina's mouth.

There are shallow horizontal etchings at the top of the face that give the appearance of a headband of sorts - the headband, perhaps, that is holding the headdress in place. As for the body of the Kachina, well... I have to say that the body of this piece is what makes it so incredibly unique. All of the details at the body are defined not by etchings into the silver - but rather by "raising" the silver. All of the little accessories and adornments displayed on the body are thus 3-Dimensional in nature.

The body itself is shaped like that of a cone cut flat at the top. The chest is barrel shaped, wide - substantial. Just below the Kachina's neck hangs a raised silver necklace, free flowing and natural in appearance. The Kachina's body is high polish, meaning it is VERY reflective of light - all the more so given its raised silver details.

To the right and left of the raised silver necklace are the Kachina's arms. The arms are almost "geometric" in nature, thickly composed and cleanly cut. The little stubs which act as hands pointing upwards.

At the Kachina's chest are displayed two beautiful design elements. These designs are segmented, and run in strands that continue from the front on to the back of the pendant - wrapping around the piece in full. They make up the Kachina's garb or clothing. The first of these segmented designs nearest the top of the chest displays ebbed silver - almost looking like waves that dribble up onto a shoreline before receding back into the pull of the tide. This ebbed silver segment is intricately carved - the marking small but clear - in traditional Navajo patterning.

Closer to the bottom of the Kachina's body is a bold, THICK, and raised silver curvy line. In my opinion, the little "peaks" of the line look like rolling hills. This thick silver addition wraps the Kachina's body - front and back. There is so much going on at the body, that one could quite easily forget about this Kachina's base - two perfectly formed little silver feet. This Kachina is flat footed - which means that the pendant can actually stand on its two feet - though it takes some balancing : These feet are beautifully constructed, with thick, short barreled legs - onto which the flat pads of sterling silver are added.

The sides of the legs are covered in spherical bezels, which makes this Kachina seem as though it is wearing decorative boots of sort. The back of the Kachina is far from plain. Look first at the back of the headdress - particularly the spacing in between each of the feathers.

Whether or not intended, the back of the headdress is artistically sound of and in itself. At the back of the Kachina's head, there is a HUGE - seamlessly welded loop, which acts at the pendants hanging mechanism. It is very thick, and incredibly secure.

A big chunk of smoothed, hand formed sterling silver. As noted earlier, the patterns at the Kachina's body mentioned on the front, are visible too at the back. This Kachina weighs 39 GRAMS!!!! Again, that weight is likely due to this piece's "statuesque" design.

This truly is a silver doll first, and a pendant 2nd. The Kachina measures 3.25 inches in height, by just shy of 1.75 inches at its widest point.

At the barreled body, this kachina is 1 INCH THICK. Overall, not only is this a piece that you simply will not find replicated elsewhere, it is also an early 25 year old work by a Navajo silversmith whose work is recognized by the Smithsonian American Art Museum....

In other words - this is more a work of art with cultural significance than a piece of jewelry. I will get back to you promptly. The item "Early Esther Wood Solid Silver 3-Dimensional Kachina Doll Standing Pendant RARE" is in sale since Wednesday, July 29, 2020. This item is in the category "Collectibles\Cultures & Ethnicities\Native American\ US\1935-Now\Jewelry". The seller is "nae_mud_1iupyzywe" and is located in Chagrin Falls, Ohio. This item can be shipped worldwide.